Zimmermann Ganahl AG celebrated its 150th anniversary on 11 September 2020 with a very special book presentation: Werner Zimmermann, historian, author and descendant of the company founders, presented a company chronicle written by him to a small audience. The presentation was rounded off by a specialist article on the circular economy by Dr Thomas Baumüller, managing director of Zimmermann Ganahl AG.

In his book, Werner Zimmermann gives an account of the fate of those people who have lived and worked around the company since its foundation, through the turbulent years with political instability and wars to today’s specialisation in waste paper recycling. When “Rohproduktenhandel Josef Zimmermann & Co en gros” was founded in 1870, the brothers Josef, Franz and Michael Zimmermann were already committed to the circular economy, namely collecting and reselling recyclable materials. Originally it was textile waste, iron, bones, bristles and metals that were processed for further industrial processing, however, the increasing use of waste paper in the paper industry meant that this raw material already accounted for the company’s largest sales share in 1939. Significant quantities of waste paper were delivered to the Vorarlberg paper mill and the company was ultimately incorporated into Rondo Ganahl AG as a subsidiary over 75 years ago.

Model companies in the circular economy
Today, Zimmermann Ganahl AG collects, sorts and manipulates around 65,000 tonnes of waste paper each year. The site at Hall in Tyrol has 40 staff who – thanks to a state-of-the-art sorting system with infrared recognition, twelve collection vehicles as well as around 150 press containers and several hundred large containers – work on professionally collecting waste paper in the region. For several years, the company has been providing a system of data protection disposal unique in Western Austria, in line with its core business: the “document crusher” (“Aktenbeißer”), a specially equipped truck, appropriately destroys documents on site. This process is certified to guarantee the controlled and protected destruction of sensitive data.

Today, like back then, a majority of the processed waste paper types are valuable raw materials for the Rondo paper mill in Frastanz (Vorarlberg), where high-quality corrugated board base paper is produced from 100 percent waste paper. This is processed into corrugated board packaging at the adjacent Rondo corrugated board factory using state-of-the-art production technologies. This makes it possible to close the recycling chain within the group of companies (recycling rate: corrugated cardboard 98.6 %, waste paper 75.0 %).

Always looking to the future
“The owners at that time had already recognised the signs of the times and used carelessly discarded products in recycling as “secondary materials” – it is remarkable how the circular economy has developed in recent decades”, says Zimmermann’s managing director Dr Thomas Baumüller, on the company’s 150-year history. “Together with Rondo Ganahl AG, we were able to accompany the triumphant progress of waste paper in perfect unison. By continually further developing and investing in the latest technologies, we have created one of the most modern recycling operations in Europe and we can celebrate this anniversary while looking confidently to the future”, said Baumüller.

This look to the future is more than hopeful: a restructuring project to improve logistical processes and modernise the company with an investment volume of more than five million euros is planned in the next two years; a clear commitment to the location at Hall in Tyrol and another sign that the founding fathers’ pioneering circular economy concept will continue to be maintained by Zimmermann Ganahl AG in the future.

About Rondo
Rondo Ganahl AG, headquartered in Frastanz (Vorarlberg, Austria), specialises in the production of corrugated board base paper and individual corrugated board packaging. The roots of the traditional Austrian family business go back to 1797. Rondo currently employs more than 1,600 people at several locations in Austria as well as in Germany, Hungary, Romania and Turkey. The company promotes the considerate use of resources and, therefore, also collects, sorts and presses waste paper and cardboard as raw material for its own corrugated board base papers. This is how Rondo manages to close the recycling chain within the group of companies. 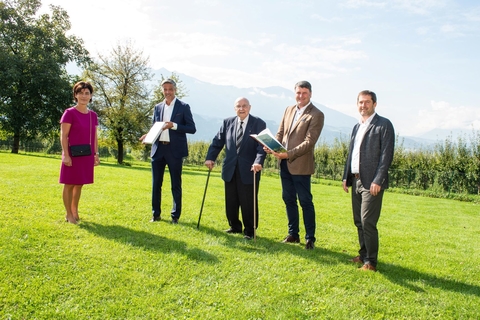 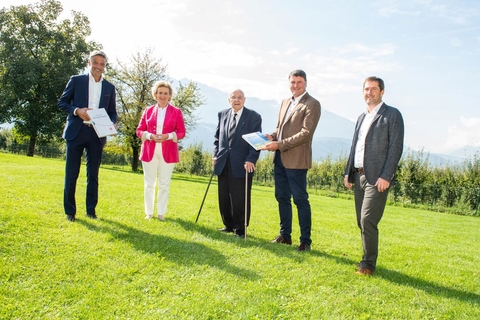 The mayor of Hall in Tyrol, Eva-Maria Posch, congratulates book author Werner Zimmermann (centre), managing director Thomas Baumüller (Zimmermann Ganahl, 2nd from right) and chairman of the board Hubert Marte (left) as well as board member Udo Nachbaur (right, both Rondo Ganahl) on the 150th anniversary. 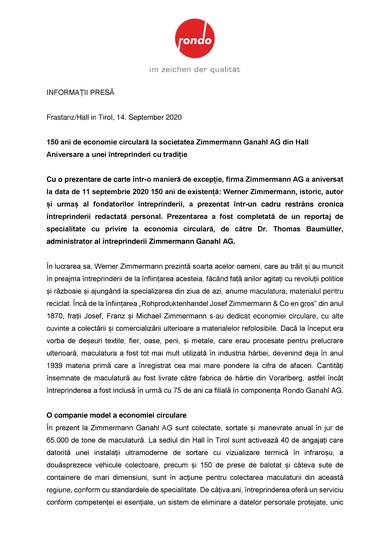